So, this project, you may or may not know, is done! I finished it a couple of months ago, because I needed to get it done before I started my new job at Rare, where I am currently based. I’ve been at Rare for about 6 weeks now, and I’m having an awesome time! However, I am currently living out of hotels and until my living situation stabilises I’m struggling to find myself in a mindset where I can work on more personal work, or the often promised Youtube videos and Gumroad project release.

After work I usually get home, and after awkwardly talking about my day with my AirBnB hosts (I’m currently on AirBnB number 3, so that’s discussing the ins-and-outs of my life with random strangers 3 seperate times), cooking dinner (normally a ready meal because I’m too awkward to cook in other people’s kitchens), and getting some much needed bird-love time (I have a bird)- let’s just say personal work isn’t happening. It’s been really a very stressful few weeks, with house hunting, having a house agreement fall through, dealing with lots of new people, new job, a trip to Malta and THU thrown in there too, being ill, and to top it off my mum is moving house too so I’ve got to change all my registered addresses. Tears have been shed, my friends. Many tears. 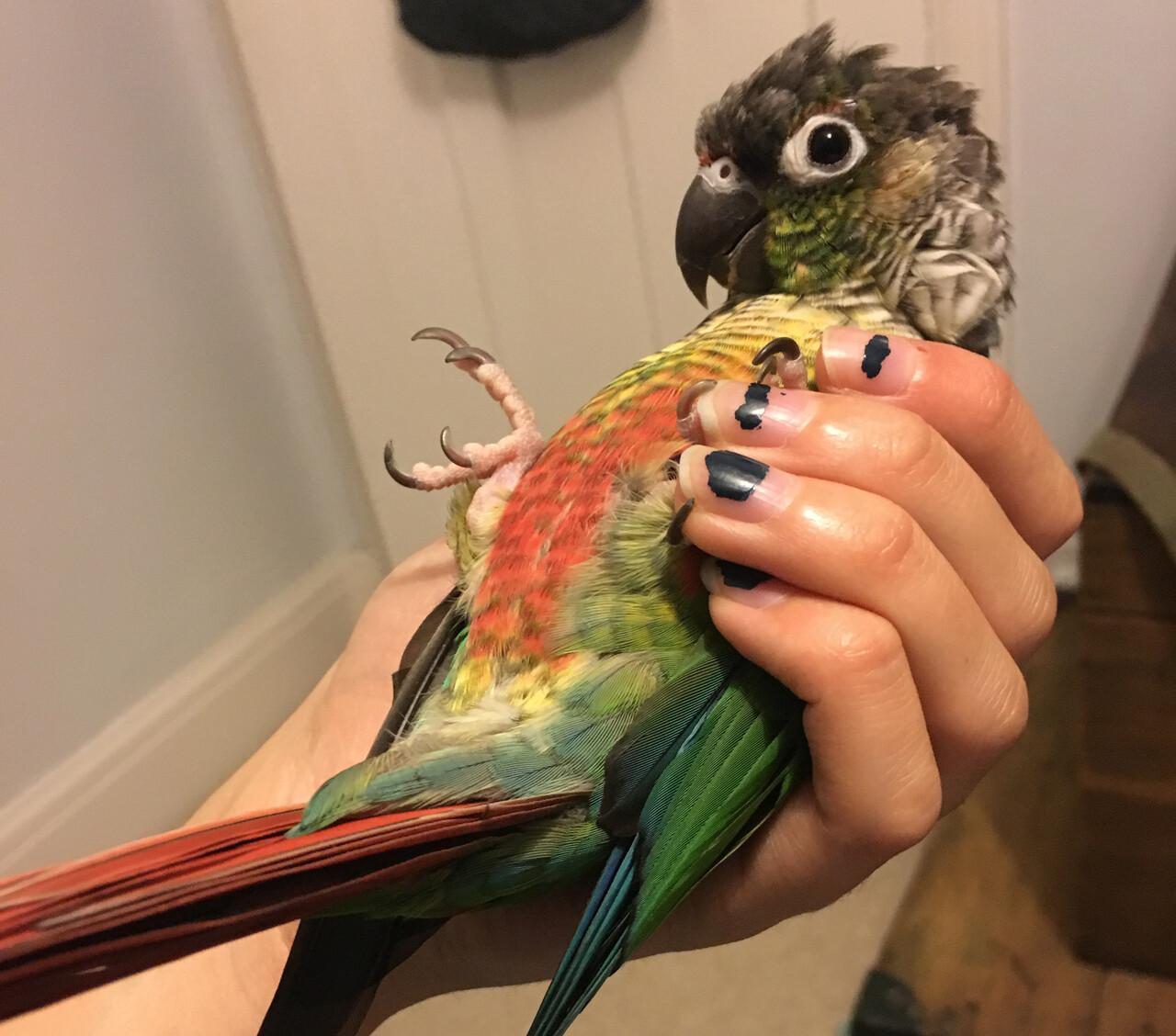 But! I think I’m getting there. I have a house in the works and should be there in a couple weeks (assuming all works out there, I’m not holding my breath just yet), and I’m starting to feel more than the need to just veg out when I get home. I want to get this Gumroad project cleaned up and available for you guys, and I want to start recording again! AND, I want to start making stuff again. Not just 3D art, or digi paints, but oil painting, crochet, sewing, dying fabric, urbex photography. The stuff that’s all good for the soul! I’m feeling super satisfied with my work life at the moment, which just fuels my desire to be creative more. 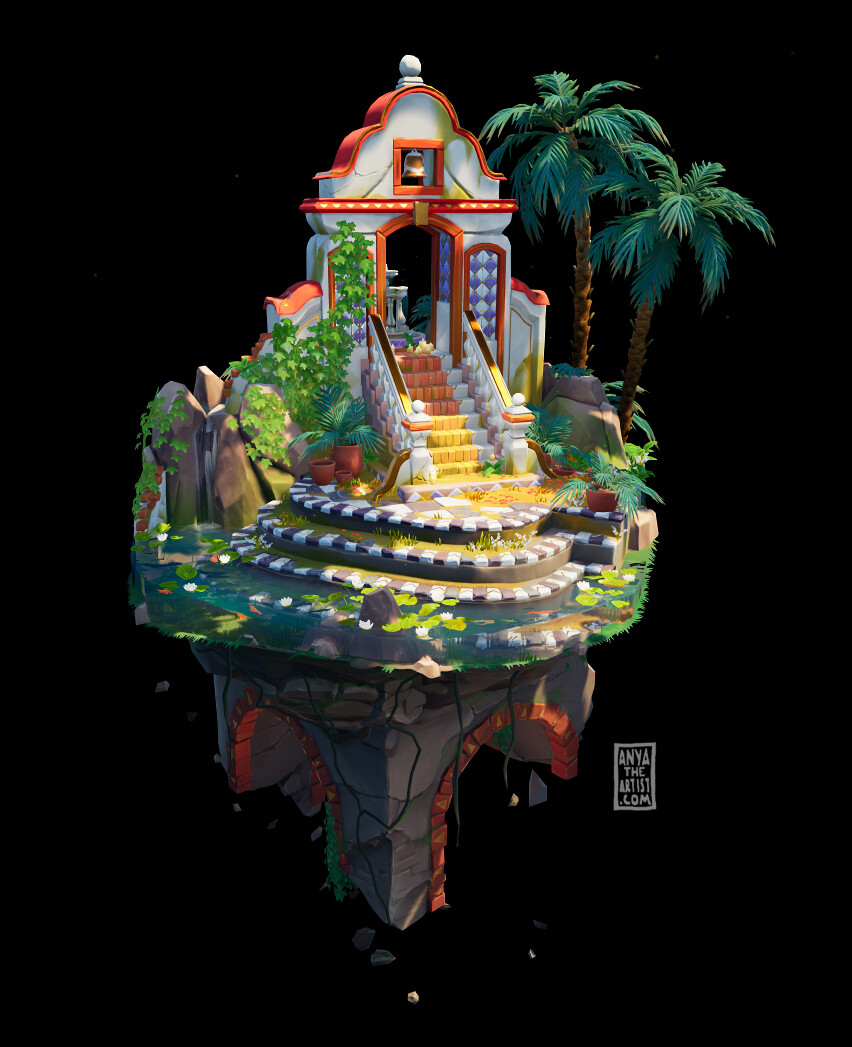 I’m glad to get it finished. I wouldn’t say I’m, like, overwhelmingly happy with it, but such is life. I’m pleased I finished it, and that I have a new piece in my portfolio so I don’t have to worry about doing anything ‘big’ for another couple of years. I want to start doing more experimental stuff again, and painting. I have an idea for my next 3D personal project, but I plan on it being much more expressive and fun, about colour and materials and storytelling. 🙂 Let’s take a look at some shots from this project and have a little talk about them, though if you follow me already you probably have seen them. It’s worth mentioning that I do intend on doing a video talking about this piece, kinda similar to this video I did, in addition to videos about the water shader, etc. Let me know if you want me to cover anything in particular. I will do them… eventually.

The biggest thing I learned from my last larger 3D project was that I can get things a bit too noisy in my need to include lots of fun foliage stuff, so I decided to dial back the amount of detail I paint into my textures and keep them quite simple. Almost flat colours. Combined with sculpting, it meant I could let the normal map do the talking in a lot of instances where I needed some detail. Honestly stuff still got a little noisy, but it was fun. I like to think it was a somewhat.. controlled… noisy? Maybe? Whatever. 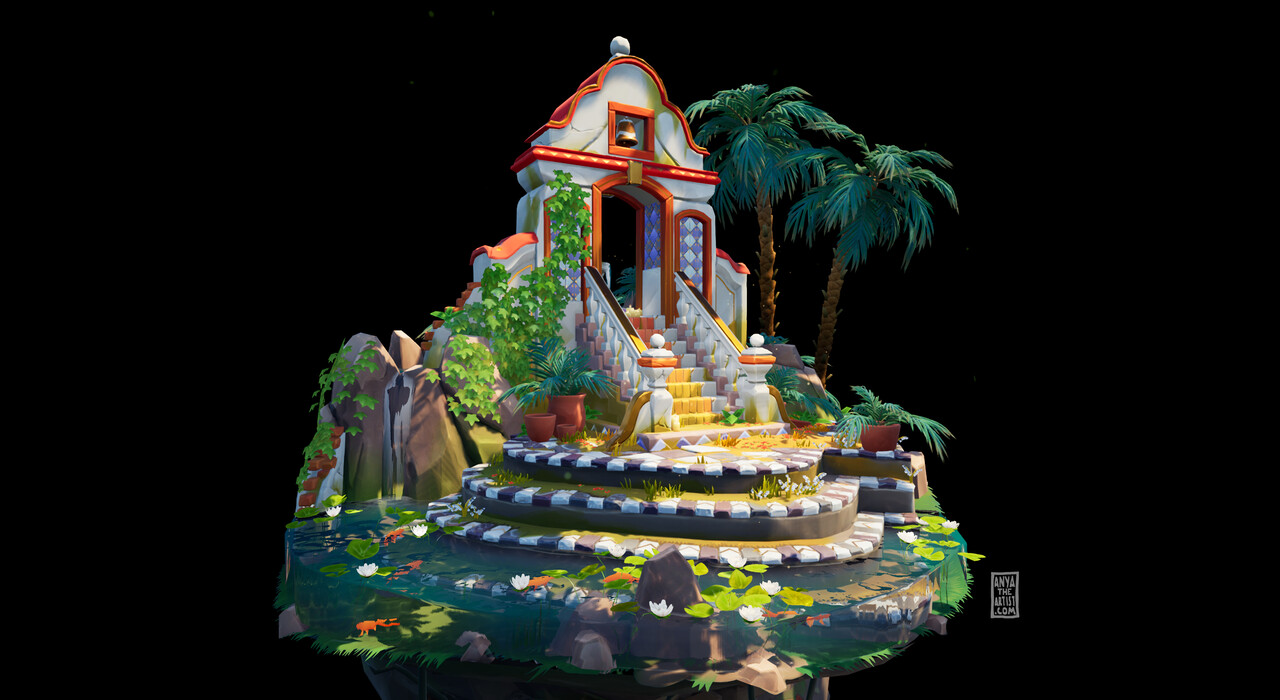 The addition of gold elements was purely because I’m a filthy hipster who likes gold and copper elements in interior design. I love the contrast in particular of black and white with gold or copper, so I’d like to play with that more in future projects. In context of this project, the gold adds a little bit of material variation with out me having to go all out adding various roughnesses to different elements  in the scene. It also subtly changes colour as it reflects and you move about the scene, which just adds a little something, and it breaks up the red on the building too. 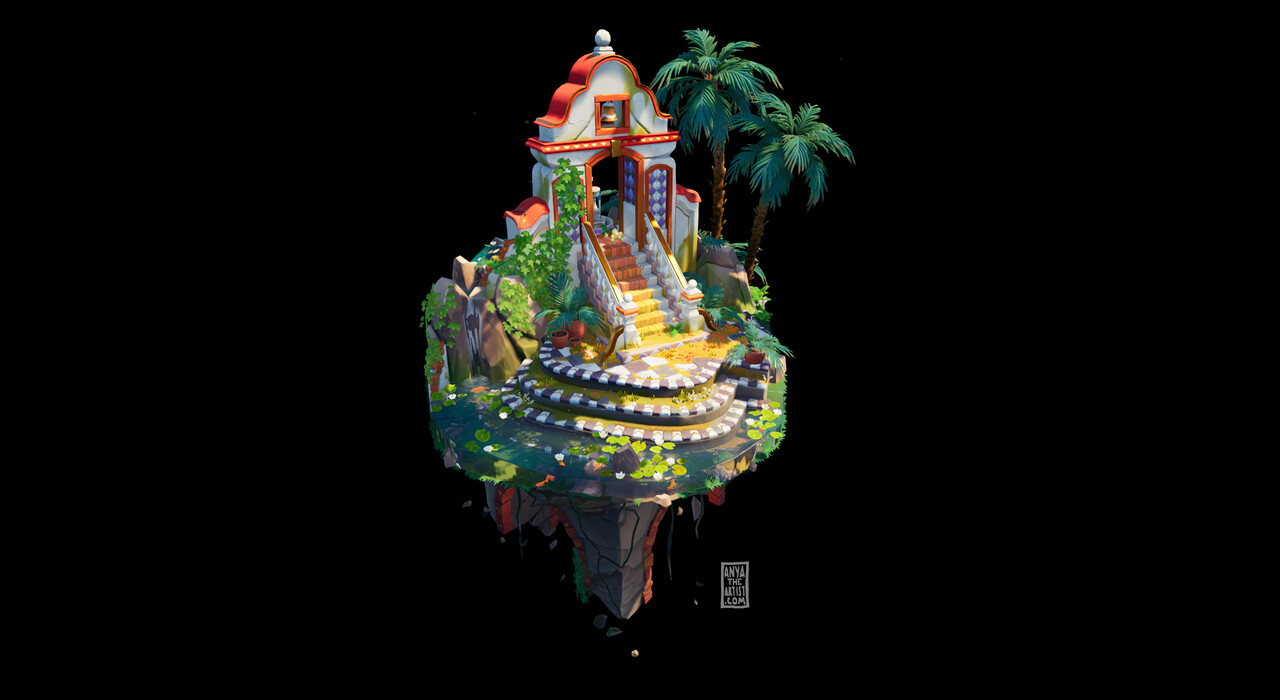 I’m probably most happy with the feel of the water. The combinations of the water shader, the colours, the floating leaves and flowers, fish moving under the surface and the caustics too… It just makes me want to go on holiday and go swimming immediately. That’s the feel I want to instil in all my work- I want it to be a place I want to chill out with a book in. 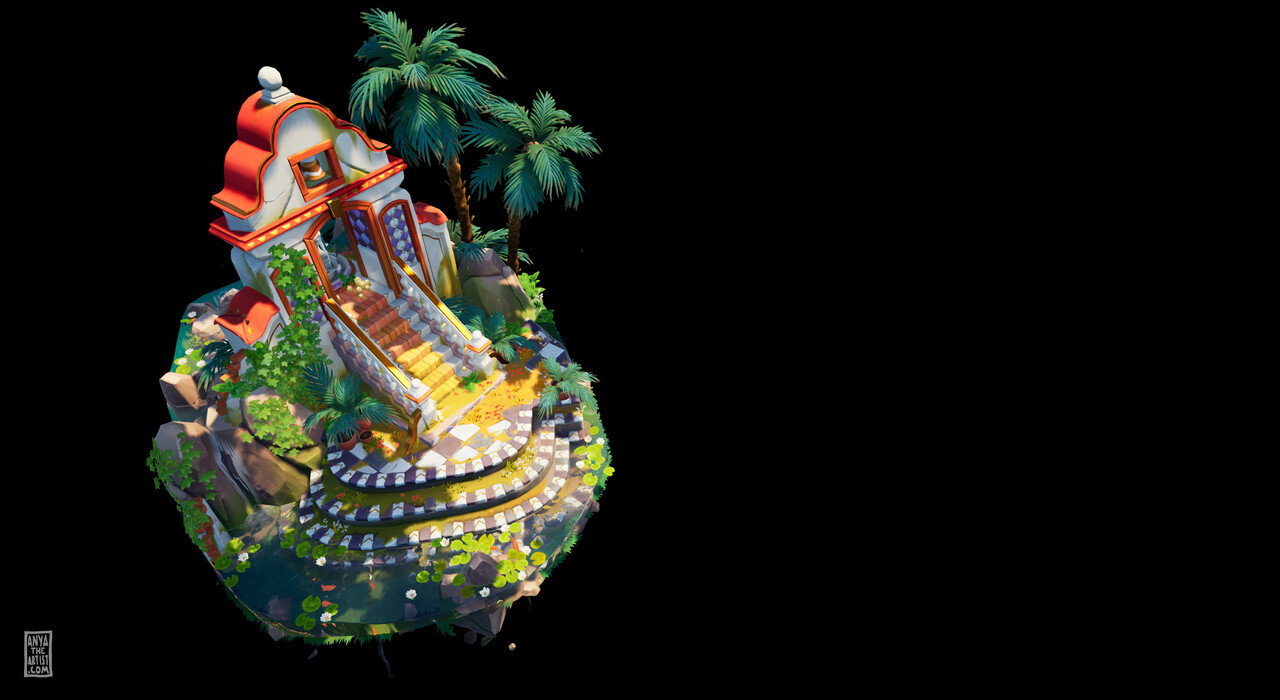 The patterned stonework and chequered floor are mostly things I like to do for fun, but also I think they work nicely with the flat green of the surrounding foliage- if the stone were all completely white (like the building), the scene would quickly become flat and boring as all the surfaces would have a similar flat surface property. The patterning adds contrast, so there are busy areas, and then softer areas to rest at. 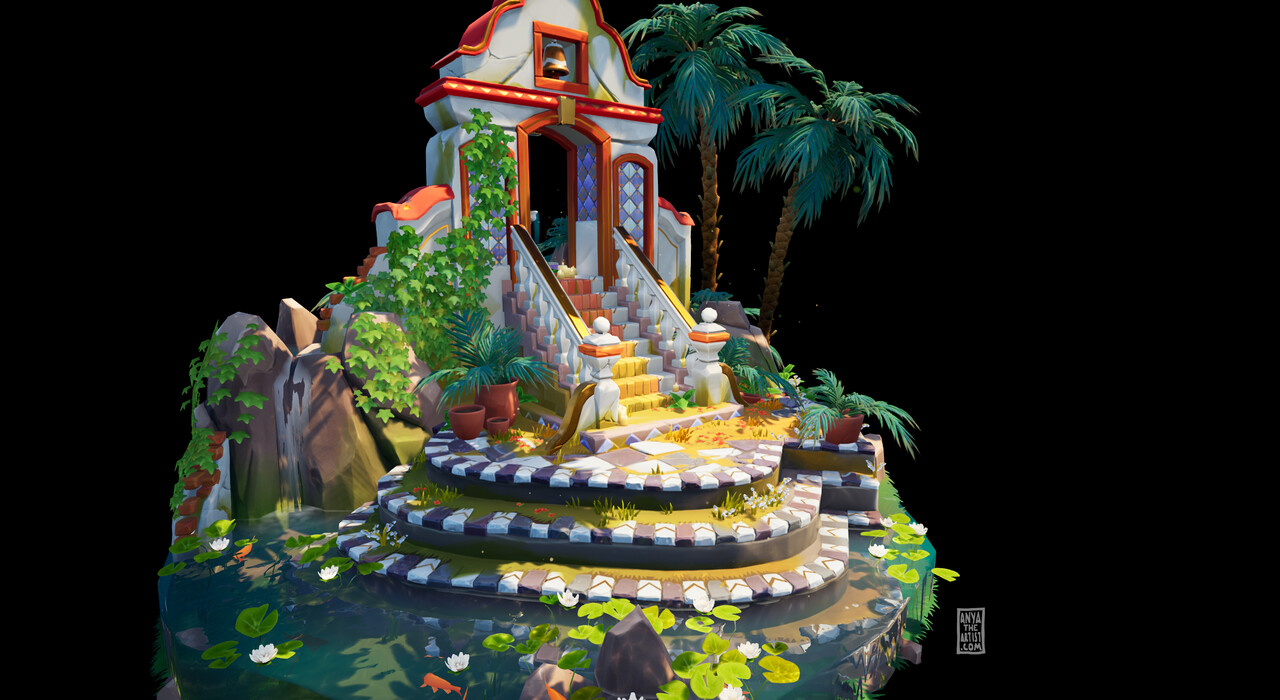 I added in some little plant pots right at the end of the project, as I felt like the scene was lacking some sort of props, but as I don’t consider myself a prop artist I didn’t want to spend forever working on lots of tiny things for the scene that may serve to clutter it. I had in my head an idea of having a book, and some shoes and maybe a blanket where someone had been reading. But maybe that would have taken from the fantasy element of the scene? Or maybe it would have added to the believability, and people could have imagined themself there, sitting on that blanket with their shoes kicked off and a book in hand. I don’t know. In any case, I couldn’t be bothered to make such finicky props and opted instead for plain pots that would sit inoffensively in the scene. I’m a sucker for terracotta pots. Also lazy. 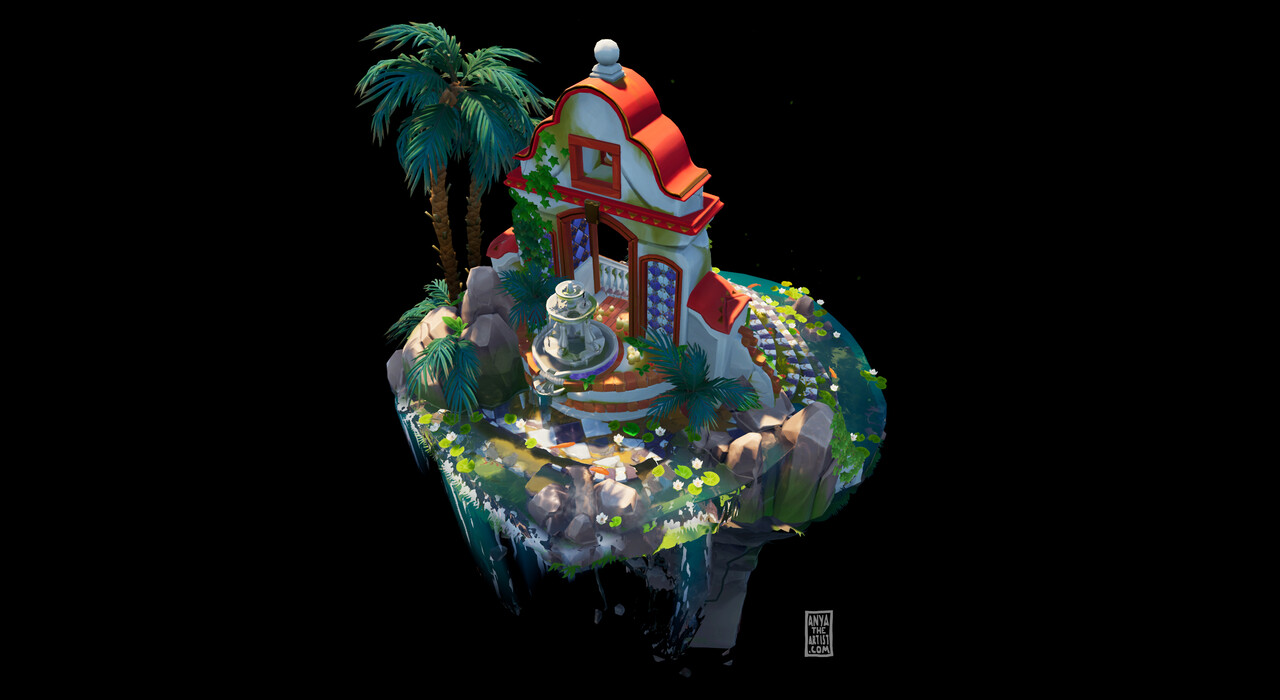 The back of the scene started out as something of an afterthought (as usual) and I re-did it quite a few times to get the depth of the water to feel right, then to add in a similar chequer-tiled element as in the front to tie it together some… it also meant I didn’t have to paint all of the underwater ground round the back, but let’s pretend it was for the artistry (lazy). I even played with removing the fountain entirely because I thought it made the back too noisy- I like having clear archways in my projects- but I opted to keep it in the end. The addition of the waterfalls coming off the scene was also a late one. The plan was to not have falling water except from the fountain at first, as I always seem to default to waterfalls, but I like the look too much. I made a falling water shader and the back felt like much less of a static, boring forgotten area of the scene. Also, learned tonnes more about water shaders! 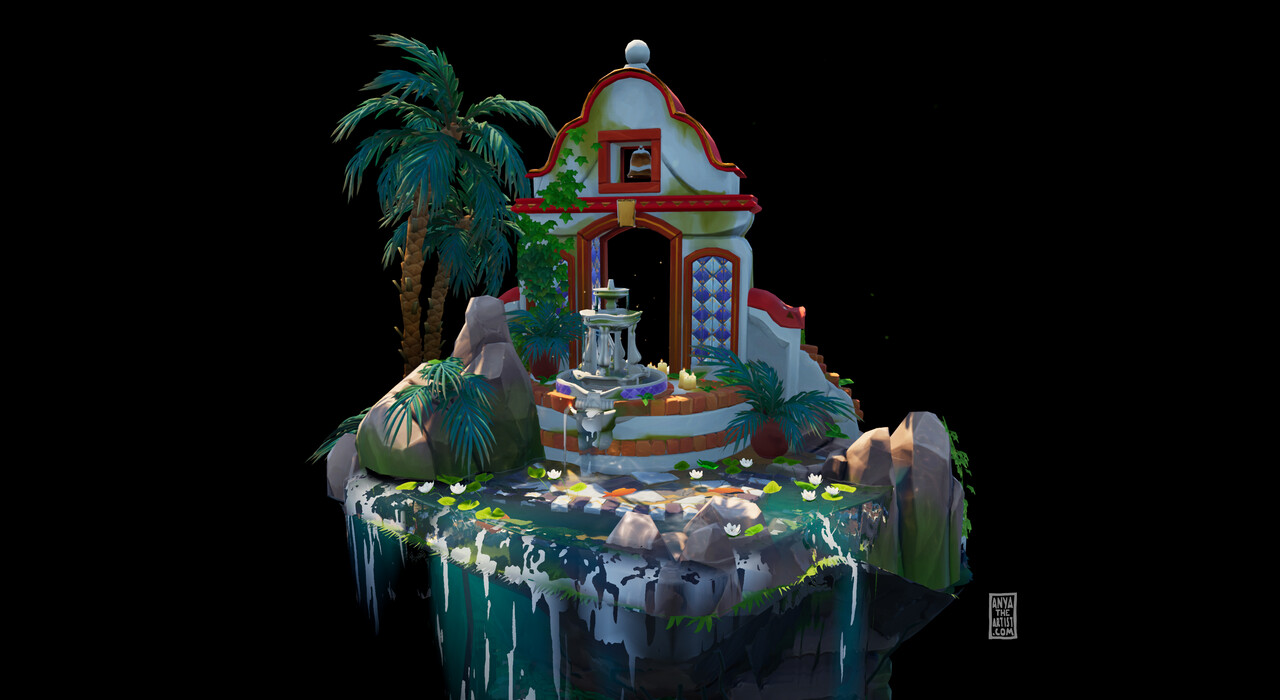 Colour-wise, I can’t decide whether I’m happy or not with this scene… It’s successful in that I very naturally found myself matching the colours of the concept I produced months ago, and I do like the colours… I think because I like playing with colour schemes a lot, I quickly fall out of love with the colour palette I choose and want to try new ones. That’s the big reason I want to focus more on fun with colour in my next personal project. I’ll cover a bit more about my colour choices in the future. Overall, I think the colours are about right and sit well together in the overall composition. I actually quite heavily plan my scene compositions around colour, so they play together nicely. 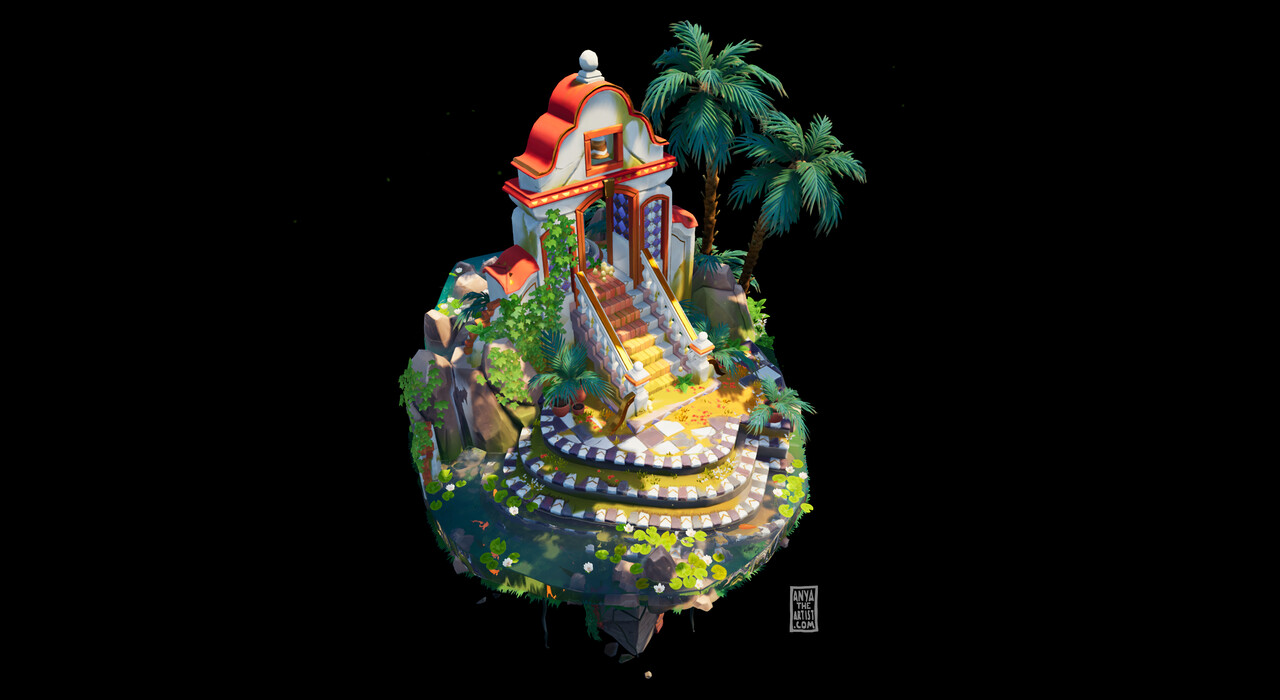 Anyway, thanks for reading! There’s really too much for me to say in a typed post unless I’m there typing for days, which isn’t really my style. In a video, I can go into way more detail and I express myself far better when the words can flow unfettered from my mouth (but I can still self-censor when I say really really stupid shit). I’ll update here when I have any new content to share, which should hopefully be soon 🙂 Take care of yourselves, go make fun art that makes you happy!