My first week working on the Epic City project has been ok. I’ve done a fair bit of painting and managed to stick to my schedule so far. Speaking of which, here’s my project schedule for the 3 weeks; 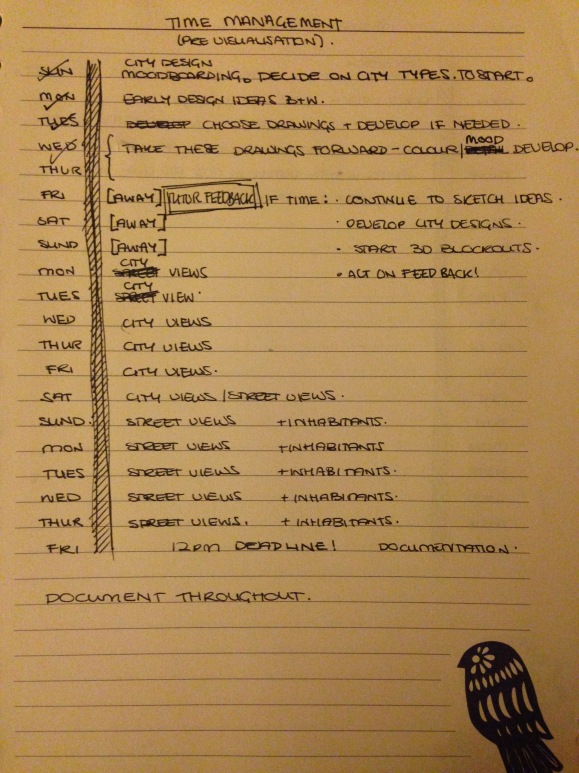 Because I didn’t plan my time so great on the Shop Front project, I’ve decided to be a bit more careful and plan my time accordingly. I’m hoping this helps me avoid the nasty rush in the last few days. I’ve tried to plan my weeks on a day-by-day basis so I know exactly what I need to do. I’ve also planned any time I expect to be unable to work.

I’ve also created a similar table where I can write down how I actually spent each day so I can compare the two and see where I went wrong at the end of the three weeks.

I’ve done all of my development work this week, so I pretty much just have to crack on with the final paintings now. I’m not 100% sure how many I should be expecting to create by the end of the three weeks; the brief specifies a minimum of 3 finished pieces per city, which is 12, but then I also need to do inhabitant sketches and perhaps some other doodles. Ideally I’d like to have more than 12 pieces overall, but I think I’d be pushing my luck and driving myself mad. I think I need to get a feel for this at the start of next week to see how fast I can work… Perhaps I should go for 2/3 quick sketchy pieces of the cityscapes, and maybe 1/2 more finalised sketches of the city streets? Sketch out some inhabitants where  I can?

Working over 3D blockouts will definitely speed up the process.

Because this project doesn’t give a huge amount of time to concept 4 whole cities, their streets, buildings and inhabitants, I decided I would make my general ideation process as quick as possible so I had more time to create the finalised paintings. I don’t want my paintings to be too sketchy, as I’ve heard that some people have been penalised for their work being ‘not finished enough’. In order to speed up my idea generation, I already had a few vague ideas in mind for what I wanted to create rather than doing loads of development from scratch. I still started with a good old fashioned moodboard though, and then circles groups of images that I thought were giving off a certain vibe. 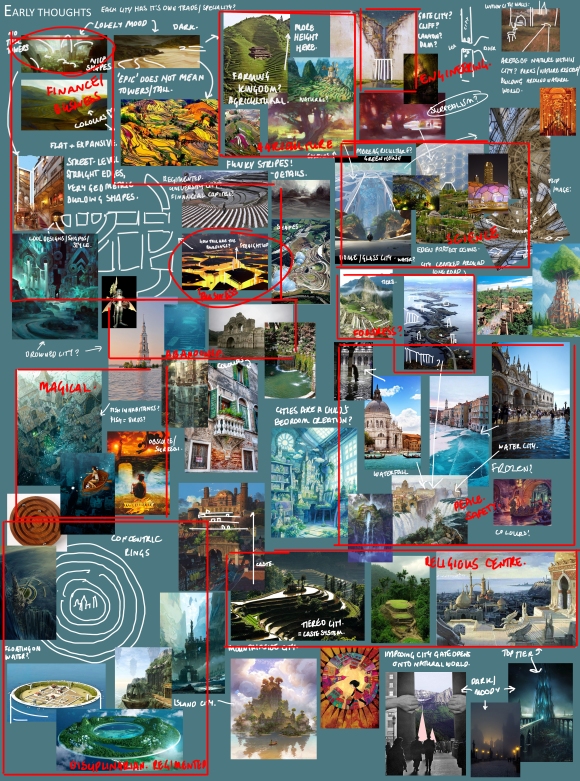 I was thinking that I would create 4 cities based around different specialisms. In this case I eventually decided on Agricultural, Magical, Military, and University/Scholarly. I had narrowed this down from 6 ideas, which I had written a brief description of and chosen some images for that conveyed their mood. I chose these ideas because they had the potential to have very different moods and colour palettes. Like I said, I already had a vague idea of what I wanted to create, so from the mood boards I jumped right in to creating some quick doodles based around my Pinterest board and ideas. 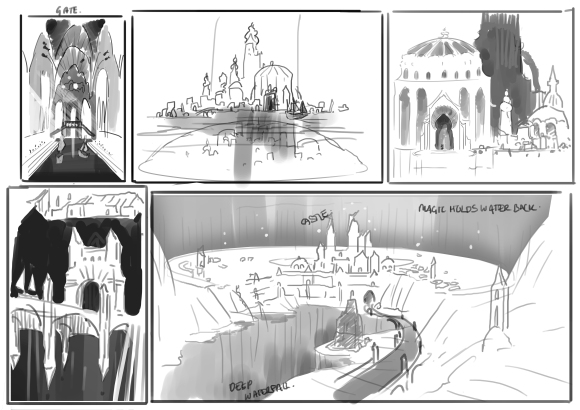 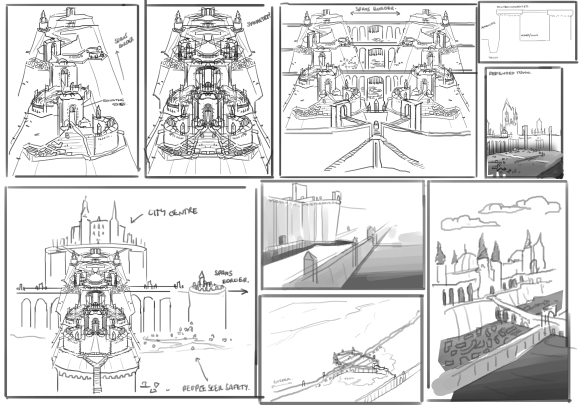 The idea behind creating these pages was to try and stretch ideas beyond what was in my head. I tried to work quickly and imaginatively. After that, I chose about 4 of my preferred sketches (or aspects of a sketch) for each city, and tried to take them a little further. I also wanted to make the sketches for each city become a little more cohesive; some sketches were completely unrelated and needed tying together a little. 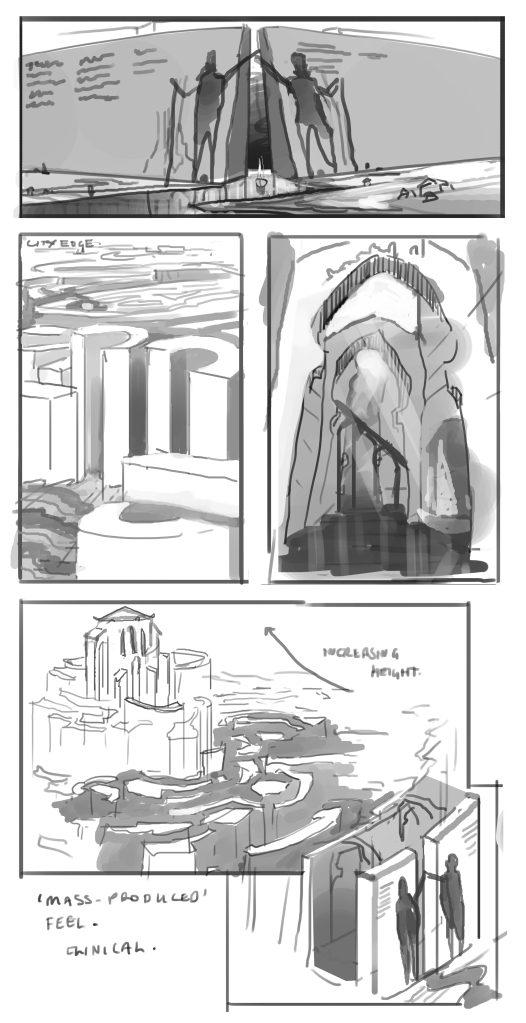 When I was happy with where my ideas were going, I once again took the sketches onto another level of development by adding colour, detail, and further tying elements together. I wanted to establish colour palettes and mood relatively quickly. I managed to do this and keep to the time schedule I had set up for myself. 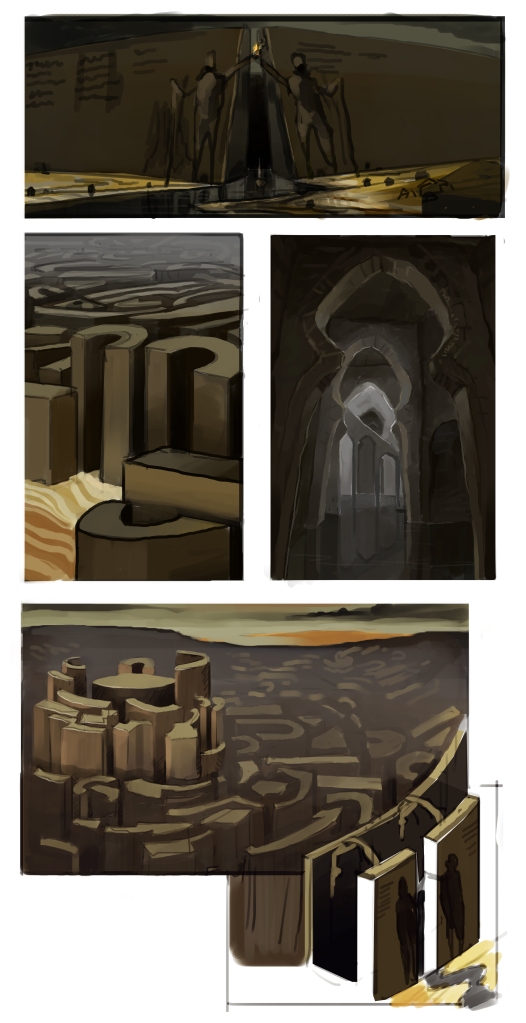 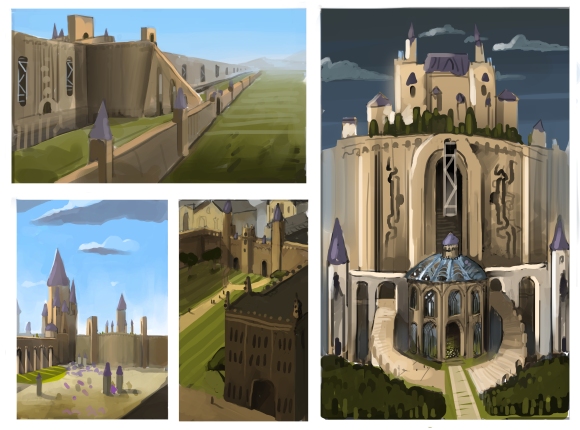 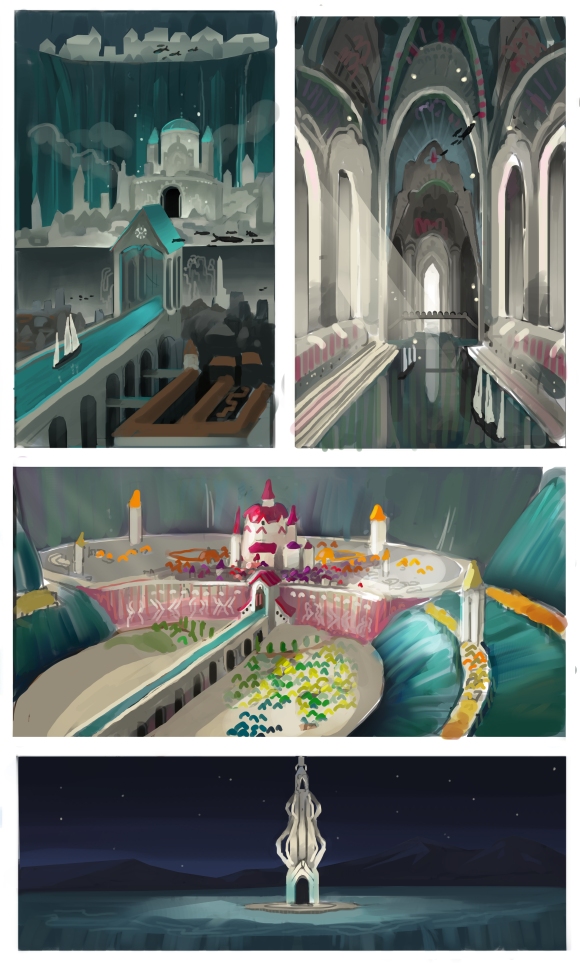 I don’t want these sketches to act as designs for my final viewpoints or anything; they’re purely to come up with mood and colour without having to work over a 3D blockout. My next step will be to create blockouts, and then decide on views for my final pieces using a camera in UE4.

So this is the point I’m at now. Unfortunately I had to catch a train (which I’m on now, woo) before Mike Kelly could make it round to give me feedback at uni this morning, so I’ll be hopefully contacting him to get that feedback asap because I really need it before I fully move on.

I hope I manage to keep on top of my time management this project. I imagine, though, that as I get into the bigger paintings I may end up struggling a little. I’m definitely not a fast painter, nor have I ever painted cities before. Apart from painting my arse off for the next two weeks, I’ll be largely a very boring person to be around for the foreseeable future. I’m on my way to Beverley to see my mum this weekend (missing Halloweeeeeeen booooo), and then it’ll be head down, pen to tablet for two weeks.

Can I art? I suppose we’ll find out next week.