I painted some things this week.

This week has been relatively uneventful in the grand scheme of things. I’ve made progress with my character project, and I feel that *finally* I’m sort of settling down into university. It’s hard to explain how I’ve been feeling lately, but after a course rep meeting with Mike and Emma yesterday, I felt like things were falling into place a little more. A rough draft of how all three years are going to continue until Summer, with projects and timings, was nice and reassuring to see. I feel like I have things to work towards, rather than taking each week as it comes. We have some great stuff coming up. My to-do list is huge right now, but I’m feeling ok about it. A lot of it is to do with creating a portfolio, maybe making business card thingies, and creating a new CV. I’m going to the VFX festival in January, so I’d like to have something to show for then.

Going back to my character project, both my characters are pretty much fully modelled now, so I’m almost ready to start handpainting them! We have been given a week extension, as the tutors reckon they underestimated the scope and potential of the project. Personally I feel like I could have worked to the deadline and I’m not going to slack off because of the extension. It means that now I can maybe rig and animate both my characters, and have some more time for personal work which is pretty good. 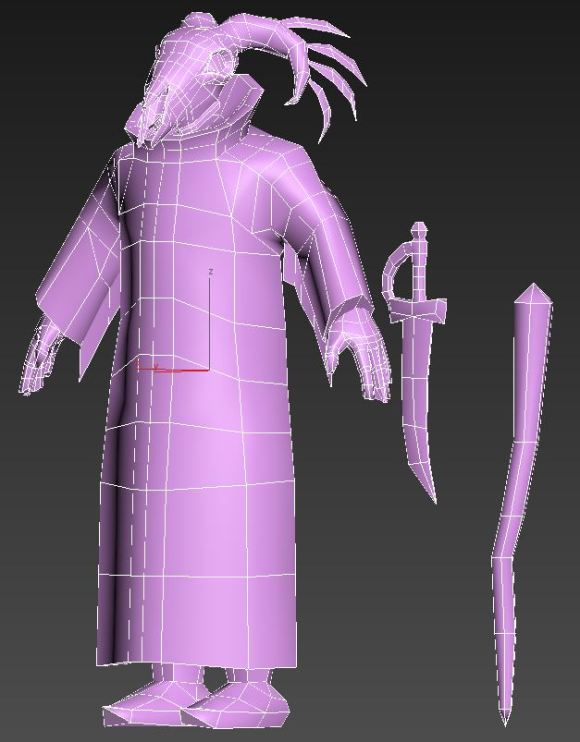 I genuinely don’t know if I’ve done good or bad at modelling these characters. I know for certain it’s muuuuch better than my gladiator project from first year (still not going to link it for you, I just looked it up and no… just no.). I feel good about the male character’s head, and the topology on the woman’s body, but that’s it. I have no clue how they will rig at all or even if this is how they do it in industry. Mike, if you read this; we should do seminars looking at industry asset/character/etc. models and what makes them so good. Maybe? 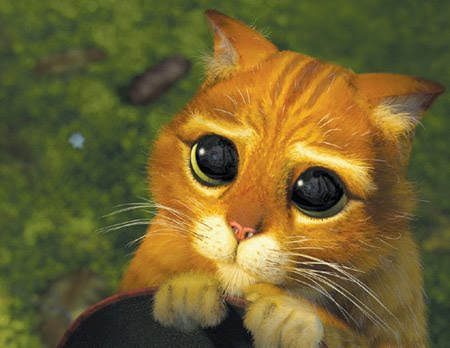 I wasn’t sure how to do the female’s skirt so I cut off her legs so that her feet are just there, floating under her skirt and I have no idea if that’s ok or not. We shall see! I’m definitely excited for texturing though.

I’ve had a little bit of time to do some painting lately, so I did a couple of studies to keep myself sane and get my soul back. The first study I did I was happy-ish with, but it’s something that looks good from a distance and makes no sense up-close. It just looks like blobs. So for my sake lean back from your screen a second; 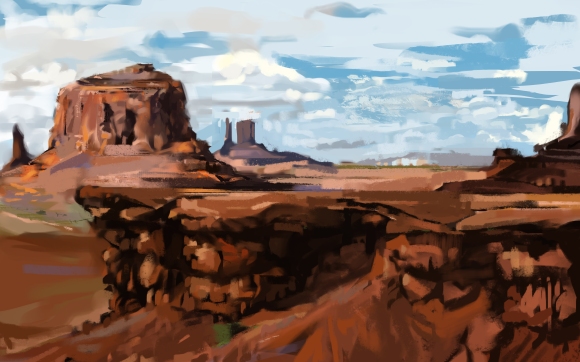 I need to learn to use less black in paintings when they have areas of dark. Someone suggested that I use colours that really pop from the shadows, to make the painting more lively. I tried this myself and it’s definitely easier said than done! Note especially the fighter’s tunics below, where the shadows are not just a darker desaturated version of a colour, which is what I tend to do. 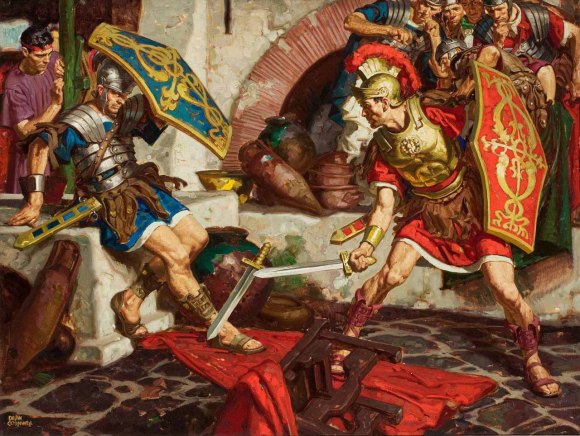 My second study I was much happier with, and it was actually much shorter at only 2 hours in comparison to the endless frustrated whirlpool of time I seemed to put into the background rocks of the previous one. I worked much more sensitively, with a square brush, a really soft brush, and then a textured brush for some rocky textures. I made sure I stayed zoomed out to stop myself noodling, and worked carefully on values and making the whole piece just look right. I don’t know what I mean by that. I stopped at 2 hours, hence some of the unfinished bits. 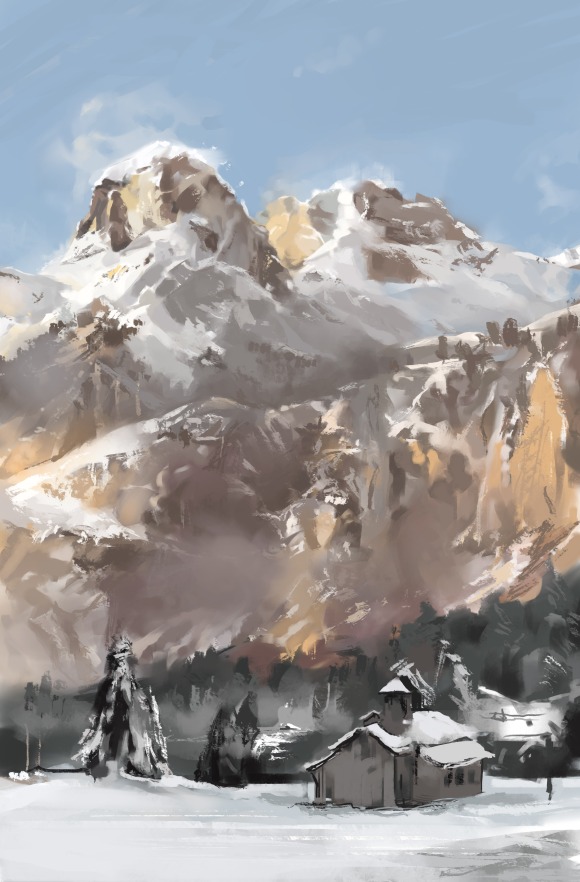 It’s definitely a leap in the right direction. When I think where I was a year ago with painting scenes like this, how I would sit for hours on my laptop getting frustrated, it’s fantastic to imagine how I could be painting in a few years time. I have a long way to go yet but my body is ready. Update on the oil painting which I can’t show you; it looks much better. I’m almost proud of it. Still a little bit to do, but it looks like what I want it to look like now. I’ve thoroughly enjoyed painting it, though next time I will most definitely prime my surface! It virtually sucked the paint out of my brush for the first layer.

Finally I’d like to briefly reflect on the UCAS event I went to. Like I imagined, the early morning really sucked and knocked me out for pretty much three days. However, at the event itself, there was a lot of interest in the course. I had a sore throat from talking to people about halfway through the day. It felt nice to help guide people in their choice of education, and it seemed that most people I talked to were interested and passionate about game arty stuff. I only wish the event had happened after the rep meeting we had, as I’d have had even more to say about the direction the course is taking, and all the work that is being done to improve it. I’d be happy to do something like that again, so I hope the opportunity arises soon. Shopping in Manchester afterwards was an added bonus which led to my discovery of Affleck’s and my consequential parting with money.

One thought on “I painted some things this week.”